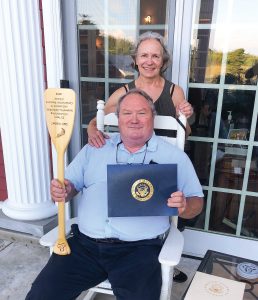 Barbara and Dan Hubbell take a seat on the porch of Black Star Farms after Dan was honored for his 25 years of service on the board of directors of the Conservation Resource Alliance. Enterprise photo by Alan Campbell

A regional conservation organization celebrated its 50th birthday last week at Black Star Farms, and its president — a Leelanau County resident — was honored for 25 years of service on the board of directors.

Dan Hubbell, an attorney who practices law in Traverse City but would rather operate his farm in Centerville Township, says the success of the Conservation Resource Alliance (CRA) lies in having a strong executive director, a dedicated staff — and a board willing to get out of their way once policy issues have been settled.

“It’s really a very experienced board,” said Hubbell prior to receiving an engraved paddle at the nonprofit’s biennial meeting. “Of all the boards I’ve served on — and I’ve served on a lot of boards — CRA is the best. And the staff of the CRA is the best. Everybody knows that our job is to set policy, not to count paperclips … that doesn’t happen very often.

Long-time fellow board member Bob Garner, who has served on the Michigan Natural Resources Commission, succinctly summed up the efficiency of Hubbell’s 20-plus-year tenure holding the gavel at meetings as CRA president: “He’s never had a meeting go over the allotted time, which is 90 minutes. That means he’s prepared and sticks to the work ahead.”

The roots of CRA did not dictate a body of work noted for finishing on time and within budget, Hubbell said. The organization started as a part of the U.S. Department of Agriculture, although enabling federal legislation called for regional Resource Conservation and Development (RC and D) boards to eventually become independent. A few did, most didn’t.

But the Traverse City-based RC and D board, which oversaw a dozen counties, understood the advantages of controlling its own destiny with funding that wasn’t prone to the fluctuations in federal budgets and shutdowns. For most of Hubbell’s tenure, its finances have been separate, relying on grants from a variety of sources to fund conservation projects.

Many of CRA’s efforts can be found in free-running rivers that have benefited from erosion control and habitat restoration projects. Naturally reproducing populations of trout have benefited. In Leelanau County, CRA worked with the county Road Commission to slow runoff at Crystal River road-crossings and to provide Mebert Creek with a free-flowing culvert under South Lake Leelanau Drive.

Its latest and perhaps most ambitious project is to work with private landowners and nonprofits to plant more than 150,000 seedlings over the next five years. The “Wild Root” program began in earnest with a tree-planting project in April held in conjunction with the Leelanau Conservancy on the DeYoung Natural Area in Elmwood Township.

The sources of funding for the plantings help explain CRA’s success. Some $100,000 is coming from a grant through the Great Lakes Restoration Initiative — public dollars — while $150,000 is being donated by Consumers Energy — private dollars. Seedlings are available to private and public landowners, who are expected to pick up 30 percent of their cost.

“We have learned how to bring various partners together, for example on a river, to identify things they have in common, and to work for a common goal. That’s where CRA is able to take these various organizations — Trout Unlimited, county road commissions — and get them to accomplish mutual goals,” Hubbell said.

CRA was criticized for working with Nestle on a water conservation project near its bottled water plant in Hersey, and for partnering on sport fish projects with utilities that run energy plants blamed for limited fish kills. But Hubbell said the organization remains keyed in on conserving the environment with partners willing to help.

“Our mission is to enhance and improve our natural resource base in northwest Michigan. So we will do business with whoever we deem to be a resource to accomplish that mission,” Hubbell said.

Also honored at the event was Matt Thomas, who for 20 years served as development coordinator of CRA. Thomas is retiring.